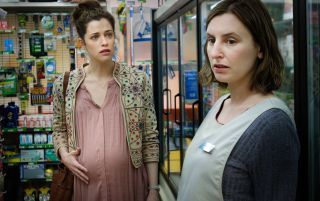 AMC Networks’ streaming service Sundance Now acquired the U.S. rights to The Secrets She Keeps, a six-part drama from Australia.

The Secrets She Keeps,  a Lingo Pictures production, stars Laura Carmichael, Jessica de Gouw and Michael Dorman and will premiere on Sundance Now during the summer.

"Sundance Now is excited to work with our friends at DCD Rights on another high-quality drama series. With its suspenseful, dark and twisty script and a stellar cast led by Laura Carmichael and Jessica de Gouw, The Secrets She Keeps is sure to be another can’t-miss drama for our subscribers,” said Shannon Cooper, VP of programming for Sundance Now.

The series is based on a novel by Michael Robotham. It features two pregnant women from different economic circumstances whose worlds collide as they try to keep their secrets.

“The combination of a stellar creative team, outstanding performances from leading talent and a truthful adaptation of a bestselling novel, has led to the exceptional drama that is The Secrets She Keeps,” said Nicky Davies Williams, CEO of DCD Rights. “We are extremely proud that the series will get the US exposure it deserves through Sundance Now and know that it won’t disappoint US audiences.

The Secrets She Keeps is a Lingo Pictures Production for Network Ten with production funding from Screen Australia in association with Create NSW.

“Sundance Now has some of the best curated content in the US, so we are thrilled that North American audiences will soon be able to watch the series on such a respected platform,” said Helen Boden of Lingo Pictures. “This is a universal story so I’m delighted that it will screen in the US as well as in the UK, France, Australia and other major territories. It’s a show we’re very proud of.”

Sundance Now is available on most streaming devices for $6.99 a month, or $4.99 a month with an annual subscription.