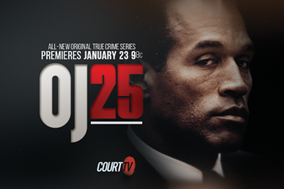 With people sentenced to home detention in order to stop the spread of the Coronavirus, Court TV is making some of the most arresting trials in its library available for free streaming.

Since the country started staying at home, video streaming is way up and programmers are making more material available to viewers at no cost.

Court TV, part of the E.W. Scripps Co., is making the trials available at CourtTV.com.

The cases being posted include:

> California v. O.J. Simpson (1995) - Known as "The Trial of the Century" as Hall of Fame football legend, actor and spokesperson O. J. Simpson stands trial for the murder of his ex-wife Nicole Brown Simpson and aspiring restaurateur Ron Goldman. Court TV is releasing the trial in its entirety in coordination with episodes of the network’s original true crime series OJ25, seen Thursday nights at 9 p.m. ET.

> Arizona v. Jodi Arias (2013) - Jodi Arias faces the death penalty for the murder of her lover, 30-year-old Travis Alexander. The body of Alexander, a devout Mormon, was discovered by friends--stabbed repeatedly, his throat slit & shot in the head. His girlfriend Arias testified that she killed Alexander in self-defense.

> New Hampshire v. Pamela Smart (1991) - In the first-ever televised murder trial in the United States, 23-year-old Pamela Smart is accused of orchestrating her 24-year-old husband’s murder. Gregory Smart was shot to death in the couple’s Derry, N.H., home. Over the following months, Pamela, a local high school employee, sat down for multiple interviews portraying herself as a devastated young wife searching for her husband’s killer. It’s later revealed Pamela had plotted Greg’s murder with four of her students, including 15-year-old Billy Flynn with whom she was having an affair.

> Texas v. Amber Guyger (2019) - Former Dallas police officer Amber Renee Guyger, 31, stands trial for allegedly murdering 26-year-old Botham Jean after entering the wrong apartment. Guyger, who had reportedly just finished a 15-hour shift, claims she thought unarmed Jean was an intruder in her apartment when she fatally shot him. Her defense team calls it a tragic accident while prosecutors claim the shooting was intentional.

> Florida v. Aileen Wuornos (1992) - Sex worker and serial killer Aileen Wuornos stands trial for the murder of 52-year-old Richard Mallory. At the time of her trial, she had confessed to murdering seven men who had picked her up while hitchhiking. She claimed the murders were in self-defense. Although she was tried for Mallory’s murder, evidence from the six other slayings was used to prosecute Wuornos. The events in the case were the basis for the motion picture Monster, starring Charlize Theron, who won an Academy Award for her performance.

> Florida v. Dalia Dippolito (2011) - Dalia Dippolito is charged with the attempted murder of her husband. Unbeknownst to her, police set up an elaborate sting with the help of her former husband and recorded her trying to hire a hitman, who really was an undercover cop. Police also staged a fake crime scene at the couple’s home and recorded Dippolito’s reaction to her husband’s presumed death.

> Cosby v. Corkery (1994) - Richard Corkery, a New York Daily News photographer, claims Bill Cosby assaulted him without provocation at a Metropolitan Museum of Art reception. Corkery was on assignment, taking pictures of Cosby and his wife Camille, who was being honored for her charity work. After being photographed during the event, Cosby allegedly picked up Corkery by his lapels and threw him out of the museum. Cosby takes the stand during the trial.