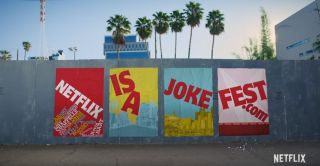 Netflix will present its first comedy festival, “Netflix Is a Joke”,  in Los Angeles this April, the company announced March 2.

Comedians, such as Dave Chapelle, Kevin Hart, Amy Schumer, are scheduled to perform. The week long festival will take place April 27 through May 3. Chapelle will headline the event at the Hollywood Bowl.

Wanda Sykes, Rosie O'Donnell and Margaret Cho will host "Stand Out," a showcase of LGBTQ comedians. Dave Letterman will host "That's My Time," which will feature interviews between the comedians and himself.

The festival will also pay tribute to some of the great comedians of the past at the end of the festival on May 3 called “The Hall” and will be housed at the National Comedy Center in Jamestown, N.Y. George Carlin, Robin Williams and Joan Rivers are among the first to be inducted.

“It's our honor to transform LA for one week into the funniest place on earth,” said Ted Sarandos, Netflix chief content officer in a press release. “...It's a chance for comedy lovers to come together and see their favorite artists as well as discover new ones, and for us to be able to share the electricity and excitement of the festival in Los Angeles with Netflix members around the world.”