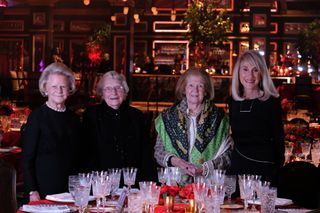 Fox News' streaming site, Fox Nation, has struck a licensing deal for the documentary film, A Lifetime of Sundays.

The film, which looks at the National Football League through the eyes of a quartet of iconic female team owners (the "Fab Four"), was produced by Jane Skinner Goodell, the former Fox News anchor and current wife of NFL commissioner Roger Goodell.

The subjects of the film are Virginia McCaskey (Chicago Bears), Martha Ford (Detroit Lions), Patricia Rooney (Pittsburgh Steelers) and Norma Hunt (Kansas City Chiefs). Jane Goodell and NFL Films interviewed them during the 2018 season about heading up billion-dollar franchises, ones they had not set out to own.

Jane Skinner Goodell hosted the "Skinnerville" segment on former anchor Shepard Smith's "Studio B," which was then produced by current Fox News network president and executive editor Jay Wallace. Wallace went to the doc's premiere and brokered the deal for streaming/Fox Business rights, the network said.

The film is currently available to all Fox Nation subs. Fox Business will also get rights to air the documentary during "select periods."