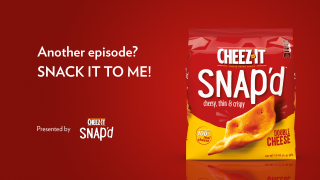 With a big share of streaming video viewers binge-watching series, Hulu has come up with a rewarding way to connect them with sponsors.

Hulu knows its subscribers and is using machine learning to predict when they are likely to start binge watching a show. Hulu serves them contextually relevant messages from sponsors that acknowledge the viewer might be there for a while. When the viewer gets to their third episode, the sponsor message says that the next episode will be ad-free or include an offer from the sponsor.

“A laser focus on consumer occasions is one lever we pull when making marketing decisions at Kellogg,” said Gail Horwood, CMO at Kellogg’s North America. “Cheez-It Snap’d, with its lighter texture, amped up cheese flavor and lower-volume crunch, was specifically designed for munching during TV viewing. Engaging with, and rewarding consumers, during a marathon entertainment session allows us to be an intrinsic part of this unique snacking occasion and taps into the thrill TV fans have when they’re racing through their favorite shows.”

According to Jeremy Helfand, VP and head of ad platforms for Hulu, nearly 50% of ad-supported viewing hours are spent binge watching. Hulu defines binge watching as a viewer watching three or more episodes of a series at a time.

“As consumers’ viewing habits continue to shift, advertisers expect new and innovative ways to capture these audiences,” Helfand said in a blog post.

Georgia-Pacific is using the binge watching ad format for its Sparkle paper towels.

“The Sparkle brand is always looking to give our consumer more of what she wants, whether what she wants is more sheets on a roll or the ability to watch more of her favorite show without interruptions,” said Jason Ippen, VP of integrated brand building at Georgia-Pacific.

“Our new campaign aims to share the news that Sparkle® paper towels now have 200 more sheets per pack (vs previous generation Sparkle). With this message in mind, we challenged our media partners to help us find opportunities that connect to this message of ‘more of what you want,’” Ippen said. “When Hulu approached us about the binge ad experience, we were excited that it was not only a great fit with our campaign message, but an innovative ad product that is grounded in our consumer’s evolving media behavior.”

Hulu is now controlled by The Walt Disney Co. Unlike streaming competitors like Netflix and Amazon Prime Video, Hulu offers both an ad-free and ad-supported version of the service. Disney’s new Disney+ is ad free, as is the first iteration of the upcoming HBO Max service from AT&T.

“Viewers desire advertising that is integrated and less disruptive to their storytelling experience. That’s why we’re committed to driving innovation that considers behavior and context when building new formats and experiences,” said Helfand “ At Hulu, we are transforming advertising to make it better for both the viewer and the advertiser, and binge ads are one of the many examples of that.”