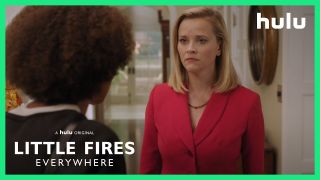 Drama Little Fires Everywhere premieres on Hulu March 18. Based on the novel by Celeste Ng, the series follows the intertwined fates of the picture-perfect Richardson family and an enigmatic mother and daughter who upend their lives after they arrive in Shaker Heights. “The story explores the weight of secrets, the nature of art and identity, the ferocious pull of motherhood,” said Hulu, “and the danger in believing that following the rules can avert disaster.”