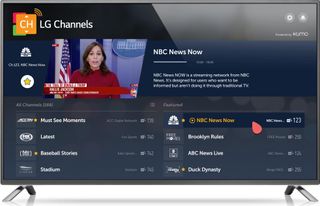 Xumo said it has added the NBC News Now channel to its streaming lineup.

NBC News Now, launched last May, offers in-depth reporting and storytelling in addition to live and breaking stories from NBC News resources around the world.

Xumo added ABC News Live to its lineup in November.

Xumo streams more than 180 digital channels of free programming across 12 genres, including news, sports, kids and family entertainment and movies. It also offers movies and episodes of series on demand.