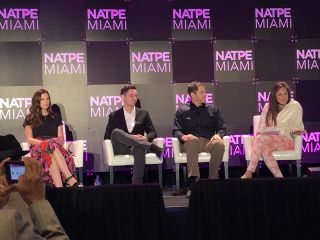 With YouTube pulling back from its subscription video model a year ago, there was speculation at the time that it might also be retreating from the original series game. But the pivot to better exploit what it’s done best for years, monetize video through advertising, has only emboldened its original content ambitions.

But YouTube has plans to double its originals output this year, releasing more than 100 movies and TV shows.

“Our position in the marketplace is somewhat different than the rest of our competitors, so we think that the current rising programming tide lifts everybody,” said Wes Harris, head of marketing for YouTube Originals at a panel at the National Association of Television Program Executive conference (NATPE) in Miami titled “Launching Original Content When It’s Not on TV.”

The tally of original scripted programming across all platforms could rise to a record 530 series this year, according to industry estimates.

“We’re pretty confident where we sit in the marketplace, and having a free platform that is available at scale to anyone across the world is quite unique,” he said. “What is good for the consumer is good for the market overall. And while all this original content can be confusing to the consumer at times, we feel what we do, and how we do it, sets us apart.”

Unlike the traditional broadcaster or streamer, YouTube has its own ecosystem with the variety of content driven by both established names and the new generation of entertainers, otherwise known the “YouTube stars.”

“It’s this openness that keeps our viewers coming back for more,” explained Susanne Daniels, global head of original content for YouTube at an executive session for YouTube at the Television Critics Association Winter Press Tour in Pasadena, California last week. “In this last year, we’ve learned a lot about what our audience loves most about our original programming. We’ve learned that they want new formats and real-time specials that reimagine the basic 30-to-60-minute model, so we’re creating new experiences that better reflect today’s culture. This can be anything from a two-minute comedic segment to a two-hour feature long documentary.”

Last year, over 50 original programs produced around the world were featured on YouTube. And one upcoming show generating early buzz, debuting on January 27th, is new docuseries Justin Bieber: Seasons, which promises to offer “an intimate look at the past few years of his life.”

“I think that because there is so much content you want to make it as accessible as possible for people to be able to consume it,” said Ben Relles, head of innovation, YouTube Originals, speaking alongside Harris at NATPE. “We have our own voice and we follow a specific strategy.”

Effective last August at YouTube was the launch of a dual distribution model, where you can binge the originals without ads behind a paywall or watch them for free in an ad-supported traditional format.

“The range of programming is what makes YouTube such a unique platform,” said Karissa Zigarovich, head of YouTube brand & entertainment insights, also at NATPE. “Since there doesn’t seem to be a shortage of competing programming anytime soon, you have to separate yourself from the rest and what we do in our research is try to become experts on our audience and the culture on the platform and as off. Last year we spent a lot of time dissecting TV content and genres, and now it is about offering the original content that people want to see.”

Added Daniels: “We have a lot more work to do as we develop shows that reflect the strengths of YouTube. We have a huge opportunity to reach a global audience and make an impact. Whether it’s highlighting the profound positive influence of artificial intelligence on our health, shedding light on what pride has meant to LGBTQ people throughout the country in our documentary, State of Pride, we want our programming to have a purpose.”