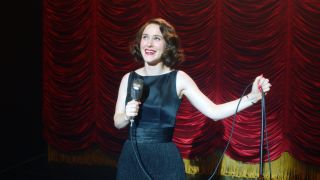 Mirroring cable years earlier, where the TV shows considered “cool” and “trendy” were housed on cable, the digital streamers have become a haven for the crème of the crop, so to speak. As with cable (excluding exceptions like Game of Thrones, American Horror Story, The Sopranos and Sex and the City), original streamed content does not necessarily attract a wide audience. But when you think of the top TV shows today, quality matters, not audience size. And the quality content, those “cool” and “trendy” shows being streamed, include dramedy The Marvelous Mrs. Maisel and Fleabag on Amazon Prime; Stranger Things, Russian Doll and GLOW on Netflix; and The Handmaid’s Tale on Hulu.

The first streamed shows that demonstrated why subscription-based streaming was a force to reckon with, both in 2013, were political drama House of Cards and prison dramedy Orange Is the New Black. House of Cards drew immediate attention for signing then A-list actor Kevin Spacey in the lead role, which opened the floodgates to other big names jumping on the digital bandwagon. And Orange Is the New Black, set at a minimum-security federal prison, demonstrated why digital could take creative risks and dare to be different. There were fewer restrictions.

Then there is the example of an acclaimed entry like Netflix comedy The Unbreakable Kimmy Schmidt, which was originally planned for NBC but shifted to the streamer after it got a better offer.

While the assumption is an outlet like Netflix might attract fewer proverbial eyeballs than a broadcast network (there are no audience metrics available to support any of the current streamers, after all), the two immediate advantages of streaming are the potential critical acclaim and the unrestricted storytelling. With accolades comes attention, at least via the critics who write about original content and the viewers who are commenting on social media. And that begs the question…just how do these shows on the digital streamers break out of the pack in an era flooded with original content?

“The obvious answer is concept and execution of each individual series,” said Robert Russo, president of consulting firm RNR Media. “Original content on the streamers also produce far fewer episodes per season than broadcast and can run at any length per episode, which is more conducive to quality and creativity. Casting big names can make all the difference.”

“It’s finding great ideas, great content; things that will ignite us and make us want to watch it; make us want to talk about it; and make us want to be those people and be in those situations,” said Mike Tankel, partner/optimist at marketing and development firm To Be Continued.  “But too many people rush to production and without adequately thinking about how to get the audience talking about it. What do we need to do to stand out? How do we market and brand it?”

Tankel cites a recent event for The Marvelous Mrs. Maisel in Los Angeles where chosen restaurants were offered deli sandwiches at prices comparable to the 1950s-set series. “It was brilliant from a marketing strategy and the whole town was talking about it,” said Tankel. “I am sure that brought more people to check out the show.”

“A good writer knows how to find characters within the show that are not necessarily the talent,” he added. “So, the deli setting on The Marvelous Mrs. Maisel, where they have their little sessions and see all the agents, has basically became a character on the series.”

Amazon Prime, meanwhile, recently offered a private screening of the third season premiere of The Marvelous Mrs. Maisel, followed by a Q&A with series stars Rachel Brosnahan and Tony Shalhoub in New York City. And two recent live events capitalized on the growing ComicCon brand: BravoCon, which showcased the network’s top series in New York City; and SopranoCon in New Jersey, which was tailed to beloved HBO drama The Sopranos.

The critics, of course, remain vital to getting a TV series noticed.

“With all this content out there, I would change the term critic to navigator,” said Tankel. “We don’t have a way of looking and seeing everything that is available without these navigators. We need someone to shed some light and say ‘check this out.’ It’s the take on the story, who it impacts, and how it makes us feel.”

“Then, of course, there is social media,” added Russo, ”which can give anyone a voice."