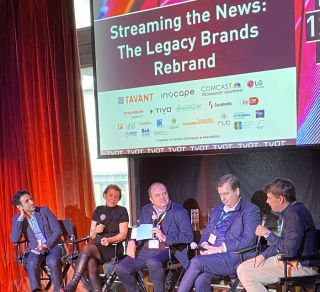 Key figures in digital news took the stage for the session Streaming the News: The Legacy Brands Rebrand at the TV of Tomorrow Show in New York Dec. 4. John Finley, executive VP of development at Fox News, said streaming platform Fox Nation was not set up to compete with Fox News Channel. "We wanted to create a complementary experience for what we called originally our superfans," he said. "What the audience seems to want out of Fox Nation is not necessarily the news channel news programming at all."

Finley said the new network had 700 original hours out of 4,000 total in its first year. He mentioned how sports content plays well on the streaming platform, and not so much on the cable channel.

"We have the best of both worlds within our ecosystem," she said. "A paid product and an AVOD product."

Chris Berend, executive VP of digital at NBC News, said NBC News Now offers more live content than its cable news brethren. It keeps on the middle of the road on news too. "When we have veered a little bit to the let with MS[NBC] talent, we get feedback immediately," he said, "saying, 'I don't want that.'"

Berend suspects news consumers will want more and more opinion-free news. "We think we can absolutely make a very healthy business doing incredibly deep coverage down the middle," he said.

The panelists spoke about how branding can get lost when news is consumed on social platforms, one noting how users often think a network news story was in fact produced by Apple News or Facebook. Kaizar Campwala, VP of business operations and insights, ABC News, spoke about social media's essential role in delivering news to users. "Social media is one of the really important ways people connect with breaking news," he said. "We spend a lot of time looking at this."

Facebook, he said, is not a retention platform for ABC News, but is nonetheless a valuable way for people to connect with ABC News content.

Berend spoke about Quibi entering the content game. NBC News is partnering with Quibi on daily programs, he said, to reach consumers wherever they are, and to learn more about how to best connect with users on the move.