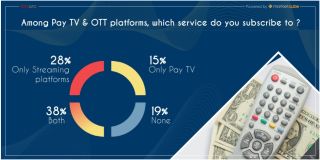 Two thirds of Americans (66%) have access to a streaming video service, and 28% watch content "only" on streaming platforms. The percentage of Gen Z OTT-only viewers is even bigger at over a third (38%).

That is according to a new survey from market research firm Piplsay, which said it polled over 56,000 people nationwide to find out what they had to say about over-the-top video.

According to the results, 38% of all respondents said they subscribe to both pay TV and OTT platforms, while almost half (46%) said they have cut back or cut out trips to the movie theater in favor of home viewing.

Piplsay argues that Hollywood has never been as challenged for eyeballs by streaming services as it is now, and not just because of the ease of couch surfing over the drive to the drive-in.

"It’s not just the ‘chilling’ at home that makes streaming platforms an attractive option," the company said, "but also the strong original content they produce that helps set them apart."

Netflix, Amazon, Disney Plus and others are spending billions to attract eyeballs with original content as OTT services try get cord-cutters and cord-sharers to shell out for another streaming video subscription.

The survey was conducted earlier this month among adults 18-plus.