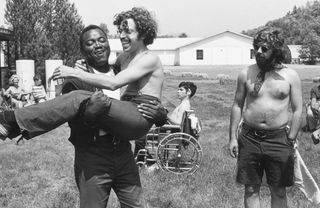 PARK CITY, Utah — Netflix showed off the latest fruits of its deal with Barack and Michelle Obama’s production company, opening the Sundance Film Festival’s 42nd year Thursday night with Crip Camp, a hugely affecting documentary about a group of disabled teens at a youth camp who later became central figures in the disability rights movement.

The film, which is part of the festival’s documentary competition, was the first feature of any kind to screen at this year’s festival. It received multiple standing ovations, especially for the large group of now-aging disabled activists portrayed in the film who attended the world premiere, then came onstage for a post-screening Q&A.

The film was directed by Nicole Newnham and Jim LeBrecht. It depends for its first part on lively black-and-white footage shot by the People’s Video Theater, a shaggy group of guerrilla filmmakers using early video cameras to capture notable activist movements of several kinds. They had come in 1971 to shoot a day in the life of teens at Camp Jened, a summer camp founded in 1951 for disabled youths. LeBrecht was one of the camp’s teens that year, a big personality confined to a wheelchair after being born with spina bifida. LeBrecht, an award-winning sound designer, also appears in the film, and conducted many of the interviews with former campmates turned activists.

The camp footage, which took LeBrecht and Newnham months to track down, is candid, impudent, playful, and illuminating. It shows a group of rambunctious teenagers who’ve been largely shunted aside by the society around them, and made to feel invisible and unwanted. At the camp, for once, they’re able to be who they really are.

“Once we got (audiences) on that train of immersion in that footage, we really needed to keep  them there,” rather than relying on other, older camp footage the filmmakers also tracked down, Newnham said.

About 40 minutes into the 106-minute film, however, it shifts gears and moves beyond the camp. The rest of the film provides an inside-out look at the history of the disability rights movement, driven significantly by what happened when those Camp Jened teens became young adults, moved to California, and became politically active.

The doc’s undoubted center from then on is Judy Heumann, confined to a wheelchair after childhood polio, but also a powerful and persistent advocate for federal laws to prevent discrimination against the disabled in jobs, education, housing, access to public facilities and more.

The movement led by Heumann and other Jened alums first pushed Richard Nixon to sign a vocational rehab bill with a non-discrimination section, then pushed Jimmy Carter’s cabinet secretary to approve enabling legislation, then fought Ronald Reagan’s efforts to eliminate the rules, then, finally, persuaded George H.W. Bush to sign the landmark Americans with Disabilities Act in 1990. The activists famously conducted a nearly month-long sit-in of federal offices in San Francisco in 1977 to push U.S. Housing, Education & Welfare Secretary Joseph Califano to release those enabling regulations.

Now, Heumann said she hopes Netflix’s global reach and vast audience (it just reported around 166 million subscriber accounts, which translates to at least a few hundred million viewers) will further raise awareness of the need for better independent-living options for millions of disabled.

“We’re hoping this film will lead to so much more,” Heumann said after the screening. “Our lives will be represented to so many people. Ultimately, the question is, ‘What’s next?’ Because it will be shown (by Netflix) in 192 countries and in 22 languages. It will be amazing.”

LeBrecht has said he hopes it does for the disabled rights movement what 1984’s The Times of Harvey Milk did for gay rights awareness. For the disabled, Ii’s been an even longer path to mainstream acceptance.

Netflix and the Obamas’ Higher Ground Productions got involved relatively late in the film’s four-year creation process, said Executive Producer Howard Gertler, but it came at a crucial time, as money from a large group of non-profit and other funders was beginning to peter out.

Sundance itself also helped out, admitting the filmmakers to its Documentary Edit & Story Lab, though Sundance founder Robert Redford said Thursday night that being part of the program wasn’t a guarantee that the film would make it to the festival, never mind the opening documentary on opening night.

“We were in post-production, and we had funders who’d gotten us quite far,” Gertler said. “But we started talking to Netflix and Higher Ground.”

And that led to the Obamas.

“We called them and they said, “Yeah, let’s do that,” said Priya Swaminathan, the Annapurna Pictures veteran who heads Higher Ground.

That led to a deal reported to be in the low seven figures, similar to another Netflix/Higher Ground doc, American Factory, that last week earned the Obamas their first Oscar nomination.

American Factory sold for a reported $3 million, evidence of the increasingly substantial market for top documentaries, both in theatrical release  and on the big streaming-video services. Netflix founder Reed Hastings has been a big backer of documentaries for more than two decades, and such films ware becoming an important programming component for streamers such as Disney+ and HBO Max, as well as cable nets such as CNN and ESPN.