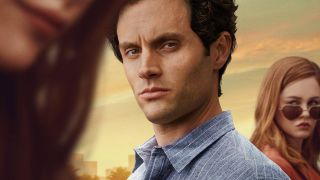 Netflix has ordered a third season of original drama You, the drama that was cancelled by Lifetime Network after one season in 2018, but has found unlikely hit status in subscription streaming.

Co-created by Greg Berlanti, and based on a best-selling novel by Caroline Kepnes, You follows the strange, voyeuristic relationships of Joe Goldberg, played by Penn Badgley. (We'll just give you Netflix's description of You: “A dangerously charming, intensely obsessive young man goes to extreme measures to insert himself into the lives of those he is transfixed by.")

“We are grateful to our partners at @netflix and @warnerbros for the endless support.... and most of all, we are grateful to every one of you freaky voyeurs for watching. See you soon, neighbor,” wrote series co-creator and executive producer Sera Gamble on Twitter earlier this morning.

It originally premiered on basic cable in July 2018, “But it didn’t work on Lifetime,” conceded Amy Baker, executive VP of strategy and insights for A+E Networks, speaking at CES last week.

Since that time, You has become the top scripted series on Netflix, Baker said.

Netflix has only confirmed that You ranked No. 5 in popularity among its series last year.