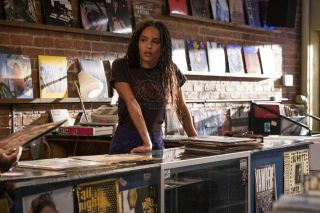 High Fidelity, a series based on the 2005 novel by Nick Hornby, begins on Hulu Feb. 14. Zoe Kravitz stars in a series about a record store owner in Brooklyn, who revisits her past relationships through music.

Kravitz plays the record shop owner, and is an executive producer.

Hornby’s novel was about a cranky male record store owner in London with a thing for top-five lists and obscure rock music. John Cusack played Rob in the 2000 film, directed by Stephen Frears.

Hornby is an executive producer on the SundanceTV series State of the Union. His other novels include About a Boy and Juliet, Naked. His memoir is called Fever Pitch.

About a Boy was adapted into a comedy on NBC, where it lasted for two seasons.

Next up for Hornby is a novel called Just Like You, which is a contemporary love story set amidst the Brexit age.

High Fidelity was initially to stream on Disney+.