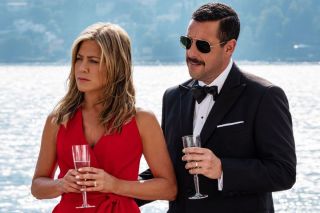 Netflix and Adam Sandler have agreed to a deal involving four more movies for the comedian and his Happy Madison Productions outfit. Sandler’s Murder Mystery movie debuted in August, that one with Sandler as a New York cop and Jennifer Aniston as his hairdresser wife, on a yacht when a murder takes place.

“Whether you know him as Sandman, the Water Boy, Billy Madison, Happy Gilmore, Nick Spitz or simply Adam, one thing is clear: our members can’t get enough of him,” said Ted Sarandos, Netflix chief content officer. “They love his stories and his humor, as we saw with Murder Mystery. So I could not be more excited to extend our partnership with Adam and the Happy Madison team and deliver more laughs around the world.”

Sandler starred in the drama movie Uncut Gems, which debuted on Netflix outside the U.S. Jan. 31.

Sandler’s other movies include You Don’t Mess with the Zohan, Billy Madison, Big Daddy and The Waterboy.

The comedian got his start on Saturday Night Live.

“Our members love all things Sandler,” said Netflix. “They have spent a whopping two billion hours watching his films since 2015 -- the year that The Ridiculous 6 premiered -- proving there’s no such thing as too much Sandler.”