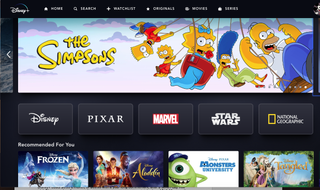 UPDATED on 3/20/20: Disney said it's postponing plans to launch Disney Plus in India, due to the massive disruption caused by the COVID-19 pandemic. The service had been set to roll out in the subcontinent on March 29.

The Walt Disney Company announced this week that its three-month-old streaming service, Disney Plus, matched the most lofty of growth forecasts after just one quarter in the digital marketplace, amassing 28.6 million subscribers.

Labeled already an “enormous success” by Disney CEO Bob Iger during Disney’s fourth-quarter earnings call, the North American launch of Disney Plus—which will soon be followed by a European invasion—in some sense represents a years-long culmination.

The Disney Plus slate is the result of a well-executed acquisition strategy that began in 2004 with the purchase of the Muppets, then Pixar in 2006, before picking up more speed with the addition of Lucasfilm, National Geographic Marvel and Fox. And now it all comes to fruition with the advent of Disney Plus. Iger has credited Disney Plus’s strong debut to the parent company’s big investments in IP. “We feel that validates that collection of brands and a blend of product,” he said.

And content-wise, Disney Plus seems to offer something for everyone: kids, teens, adults, men and women. “We are seeing the four-quadrant appeal of our brands reflected in our subscriber numbers,” Iger noted.

Combine that with a sleek Disney Plus app and the marketing power of its parent company, and Disney+ is already achieving Disney’s broader goal—that is, compete with Netflix globally for next-generation video consumers.

Can the growth be sustained? There are skeptics. Equity research firm Needham & Company, for example, has expressed doubt about Disney’s growth projections for Disney Plus. And there’s new streaming competition on the horizon for Disney Plus, with AT&T’s HBO Max, and Comcast/NBCUniversal’s Peacock set to debut in the spring, along with Jeffrey Katzenberg’s big mobile video play, Quibi.

As we watch what happens next with the most exciting new OTT platform to emerge in years, here are four things to keep an eye on:

Low Price
Disney Plus costs $6.99 a month, or $69.99 with a year-long commitment, after a seven-day free trial. Disney Plus subscribers can also bundle Hulu and ESPN+ for a total price of $12.99 a month. A solo subscription to Hulu goes for $5.99 a month. ESPN+ is 4.99. The individual prices of those services added together comes to $17.99. Thus, bundling saves subscribers $5 a month, a 28% discount. Put another way, after the subscription prices for Hulu and ESPN+ are taken into account, bundling subscribers are getting Disney+ for $1. Consumers can also get a free year of Disney Plus by signing up with Verizon. Netflix, the SVOD service Disney Plus is seeking to destroy—or merely slow down—charges $12.99 for its most popular tier, the HD version that allows two concurrent streams in the home. That means Disney+ is nearly half the price of Netflix. In an era of ever-escalating programming costs, how long can Disney Plus afford to keep its price point so low?

Broad Appeal
As Iger mentioned, a big part of Disney Plus’s early success has been its “four-quadrant” appeal—its ability to bring in all major audience demographics. Most major streamers depend on kids’ fare to keep parents paying up. And Disney Plus has the most robust kids offering in the streaming biz, from Disney shows like Hannah Montana to Disney Animation classics including Frozen to Pixar movies like Moana, while also factoring in The Muppets and Nat Geo nature show. And as the kids age into that all important tween/18-35 demographic, Disney Plus offers even more punch with some of the best of Marvel’s superhero blockbusters and the entire nine-film “Star Wars” saga. For the more musically-inclined, there’s also High School Musical: The Series. For more mature audiences who are less interested in things that go “bang,” Disney Plus offers classics from the Fox archives and the entire suite if National Geographic programming. Perhaps most importantly, there are hits like “Star Wars”-based series The Mandalorian, which span audience age demo, race and economic brackets. As Disney Plus reloads The Mandalorian, with season 2 in production, what other four-quadrant hit(s) will bubble up? Perhaps it will be the three Marvel-based original series that were promoted with this Super Bowl ad.

Solid Technology
Sure there were those famous early technical glitches for Disney Plus, which the company attributed to growing faster out of the gate than it was initially prepared for. But outage reports have been few and far between since those early days. There was also concern that the Disney Plus North American launch would be undermined by an impasse with Amazon, and that Disney Plus would debut in November with no app support for the No. 2 OTT ecosystem in the U.S., Amazon Fire TV. But that got taken care of, as well. These days, everyone seems pretty happy with the performance of the Disney+ app, and it seems to effectively play across the device ecosystem—from Roku to Fire TV to Apple TV to Android TV; from iOS to Android mobile; and from Xbox to PlayStation. With device ecosystem purveyors like Roku and Amazon gaining more market share and power, while developing their own content agendas, will Disney Plus be able to avoid licensing disputes and sustain a smooth distribution path to its customers?

Global Expansion
Iger calls international expansion “the next big priority.” Disney Plus is launching first in the U.K., Ireland, France, Germany, Spain, Italy, Switzerland and Austria, starting in March. Shortly thereafter, Disney Plus will expand into another massive market, India. In that country, Disney will be rebranding its existing Hotstar VIP and Premium subscription tiers to Disney Plus Hotstar. Iger calls this “a great opportunity to use the proven platform of Hotstar to launch the new Disney Plus service in one of the most populous countries and fastest-growing economies in the world.” Belgium, the Nordic Countries and Portugal will follow. Will Disney Plus be as successful in these regions as it has been in North America?