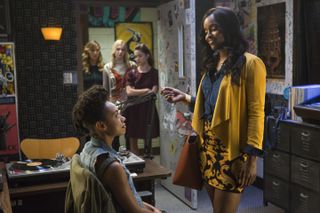 Netflix drew the most nominations for the 31st Annual GLAAD Media Awards, the organization announced Wednesday.

Netflix drew 15 nominations for GLAAD Media Awards -- which recognize and honor media for their fair, accurate and inclusive representations of the lesbian, gay, bisexual, transgender and queer (LGBTQ) community and the issues that affect their lives -- for such shows as Dear White People (pictured) and When They See Us. HBO Finished second with eight nominations, followed by broadcast networks ABC, NBC and CBS with four each, according to GLAAD.

The GLAAD Media Awards ceremonies will be held in New York on March 19 and in Los Angeles on April 16.

A partial list of GLAAD Media Awards nominees in the television category are as follows:

One Day at a Time (Netflix)

The Other Two (Comedy Central)

“This Extraordinary Being” Watchmen (HBO)

Tales of the City (Netflix)

When They See Us (Netflix)

"Mr. Ratburn and the Special Someone" Arthur (PBS)

She-Ra and the Princesses of Power (Netflix)