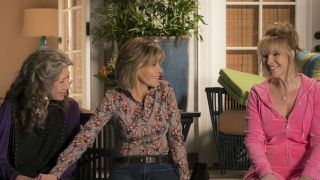 Season six of Grace and Frankie begins on Netflix Jan. 15. Jane Fonda plays Grace and Lily Tomlin plays Frankie, women whose lives are turned upside down when their husbands reveal they are gay, and are leaving their wives for each other.