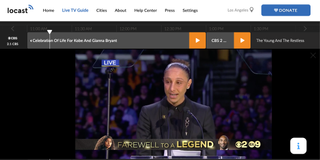 UPDATED on 3/20/2020: Locast has temporarily suspended pledge breaks due to the ongoing COVID-19 pandemic.

Followers of media technology court battles, who remember Aereo’s unsuccessful legal fight against the major broadcasters in the U.S. Supreme Court eight years ago, are getting ready for another big legal showdown pitting a tech startup against the Big Four.

Locast provides local broadcast signals over the internet in various cities through an app that’s playable on Roku, Amazon Fire TV, Apple TV, Android TV and TiVo devices, as well as iOS and Android smart phones and tablets. With Locast, you can stream programming on the Big Four broadcast networks (ABC, CBS, NBC and Fox), among other outlets.

To-date, more than 1 million viewers have signed up for Locast.

There is no subscriber cost for Locast, and the platform insn’t ad-supported, either. Donations, however are suggested by its nonprofit operator. The nonprofit service launched a GoFundMe page with the goal to raise $500,000. Locast, in addition, has a donate button on its website, asking subscribers to donate as little as $5 per month.

“There are considerable costs for equipment, bandwidth and operational support that helps run Locast,” according to a statement on the website. “These costs will only go up as we expand our service to new markets, as well as when more and more people cut the cord to become new Locasters.”

For Locast, however, the biggest expenses right now are its legal ones.

Remember the Aereo
Few discussions about Locast’s legal underpinnings don’t involve Aereo, entrepreneur Chet Kanojia’s streaming startup that predated Locast by nearly a decade. As you may recall, Aereo ultimately crashed on the rocky shores of the U.S. Supreme Court.

Updated: On March 2, 2020, Locast announced that it added Gigi Sohn, advisor to former FCC Chair Tom Wheeler, to its board of directors.

Launched in 2012, Aereo offered a viewing alternative for early cord cutters looking for a way to replace major broadcast stations in era that lacked platforms like CBS All Access. Aereo’s model let subscribers pay to lease individual, dime-sized antennas situated in local warehouses. But Aereo (like Locast today) didn’t obtain permission from the copyright owners of any programs it transmitted. And in a lawsuit filed against Aereo by a number of the broadcast networks, SCOTUS ruled against the startup. The 2014 ruling effectively put Aereo out of business.

So what makes Locast think the same thing won’t happen to its service? Locast, in contrast, operates under a law written into the Copyright Act of 1976 (17 U.S.C. 111(a)(5) that allows nonprofit translator services to rebroadcast local stations without receiving a copyright license from the broadcaster, and even collect a fee to cover the cost of operations. Locast streams signals from local TV stations, all positioned to comply with FCC exclusivity rules. Locast claims it doesn’t have to negotiate retransmission fees from broadcasters, and is exempt from copyright restrictions, unless it’s turning a profit.

Of course, the legal challenge from the major broadcasters was inevitable.

In July 2019, ABC, CBS, FOX and NBC filed suit against Locast, comparing it to Aereo and alleging that the streaming service violates their copyrights by retransmitting their programming without permission and compensation. The lawsuit also accuses Locast of allowing its service to be used as a pawn in broadcast retransmission negotiations with Dish and AT&T, operators of the Dish and DirecTV satellite TV companies, respectively.

“Locast is simply Aereo 2.0, a business built on illegally using broadcaster content,” the suit contends. “While it pretends to be a public service without any commercial purpose, Locast’s marketing and deep connections to AT&T and Dish make clear that it exists to serve its pay TV patrons.”

“Locast is not a public service devoted to viewers whose reception is affected by tall buildings. Nor is Locast acting for the benefit of consumers who, according to Locast when promoting its purportedly free service, ‘pay too much,’” the lawsuit reads. “Locast is not the Robin Hood of television. Instead, Locast’s founding, funding and operations reveal its decidedly commercial purposes.”

In its countersuit, Locast has accused the Big Four broadcasters of colluding against it, claiming the plaintiffs are using their market power to prevent distributors and other platforms from partnering with them, citing virtual MVPD YouTube TV as an example.

“What Disney and the giant broadcasters don’t want the public to know is that they are attacking a tiny non-profit serving the public interest with free local broadcast channels over the internet, and that these companies just want to protect their billions of dollars in profits and fees for channels that are supposed to be free to the public in the first place,” said founder Goodfriend, in a statement. “Now that technology can deliver local broadcast channels over the internet without costing consumers an arm and a leg, Disney and these huge broadcasters will go to any length to shut us down, including through baseless claims, using expensive New York City and Washington, D.C., law firms.”

AT&T, additionally, chimed in with its support.

“Locast offers consumers an innovative new way to access free over-the-air signals,” the telecom said in a statement. “We support technologies that give consumers more choices and better access to this local content.”

With additional markets in the planning stages, Locast is actively planning ahead. But, given the current legal uncertainties, no one knows for sure what the future holds.