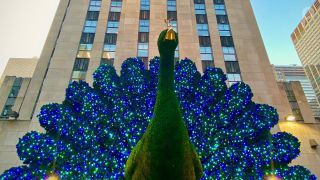 If Peacock reminds you more of a cable channel than a streaming service, it’s because the online platform was largely cooked up using ingredients from the familiar recipe feeding NBCUniversal’s long-time success.

Yes, taking flight with Peacock means that Comcast and NBCU are joining the industry’s tectonic shift to online, on-demand, streaming video, spending heavily on exclusive content while giving up much more in syndication revenue.

But Comcast isn’t dumping its still-lucrative cable TV business. In fact, Peacock might be the most traditional-looking streaming service out there, built on these ingredients:

Tiers of service? Check. Everyone else gets access July 15. They’ll choose from two ad-supported versions, Free or Premium, available for viewing “on all popular connected mobile and web devices.” Ad-supported Premium Peacock will have double the content for $4.99 a month. An ad-free Premium will cost $9.99/month.

Advertising? Check. The company expects “hundreds of millions (of dollars) in initial advertising revenue.” Indeed, last year, NBCU Chairman Steve Burke estimated Peacock ads would generate $5 per month per subscriber. Eli Lilly, State Farm, Target and Unilever will help Peacock hit that lofty goal. Mixed revenue streams like this are common in basic cable and AVOD services, but not among the big streaming competitors, where only mobile newcomer Quibi has committed to ad-supported tiers.

Confusing access to lots of content? Check. Peacock Free will provide “next-day access to current seasons of freshman broadcast series” and “select episodes of marquee Peacock originals and tent-pole series.” Got that, viewers? Free also brings “curated” daily news and sports, entire seasons of “classic” series, some Universal movies, and basic-cable-style “channels” built around NBCU stalwarts such as Saturday Night Live. Peacock Premium will have access to much more of everything.

Dick Wolf shows? Check. After all, what would an NBCU venture look like without the prolific producer? Indeed, Peacock takes flight with six of the longest-running iterations of Wolf’s Law and Order and Chicago franchises.

News? Check. Unique so far among the big streamers (let’s see what HBO Max does with CNN), Peacock promises significant live programming from big NBC News shows, as well as a new international network with Sky. Not mentioned: anything from existing cable news nets MSNBC and CNBC.

Olympics? Check. Speaking of globally popular sports, the long-time Olympics broadcast partner will give Peacock subscribers early access to the 2020 Summer Games in Tokyo, including opening and closing ceremonies, three daily highlight shows and 1,000 hours of Tokyo Paralympics programming. The Tokyo games, by the way, start just nine days after Peacock becomes widely available.  After the games end, Peacock will launch a dedicated Olympics channel to count down to 2022.

Late-night talk shows? Check, check and check. Except you won’t have to be a night owl to see The Tonight Show with Jimmy Fallon or Late Night with Seth Meyers. Both will stream on Peacock three hours before their usual NBC window.

Kids programming? Check. Most major streaming services rely on kids programming to keep parents re-upping their subscriptions, and Peacock will, too. That said, Peacock’s kid slate looks underfed compared to Disney+, Amazon or Netflix. It includes the first pay window of distribution for a few upcoming DreamWorks Animation features (all modest sequels), several new series based on DreamWorks franchises, and new episodes of the animated Curious George series.

Beyond those familiar shows, Peacock’s recipe ladles on lots of other content, much like the deep VOD well that you can, eventually, find on your cable box.

Depending on the tier, Peacock will provide either 7,500 or 15,000 hours of programming, filled out with numerous tasty talent deals and exclusives.

One big beneficiary is Kevin Hart’s Laugh Out Loud Network, now bolstered with an equity investment, first-look deal and catalog distribution from Peacock.

Long-time NBC-connected talents Tina Fey, Mindy Kaling, Amy Poehler, Will Forte, and David Schwimmer are creating shows, and reboots are coming for favorite franchises such as Saved By The Bell, Battlestar Galactica, and Punky Brewster.

The company also plucked shows from the larders of U.K.’s Sky Studios and Channel 4, and signed programming deals with the NBA and with NASCAR racing legend Dale Earnhardt Jr.

Perhaps more surprisingly, Peacock signed deals for Yellowstone from ViacomCBS’s Paramount TV, and Two and a Half Men and The George Lopez Show from Warner Bros.

Audiences aren’t likely to care where these shows came from, just where they can find them. But cutting licensing deals with competitors that have their own streaming services is just another example of the streaming future’s complicated and fraught transition.

Traditional Hollywood companies are forgoing vast sums from content syndication as they shift to streaming’s uncertain economics. Peacock’s Warner and ViacomCBS deals are another example where Comcast is relying on a traditional recipe for streaming success.

You don’t often hear about ARPU from other streaming services, but it’s an important online yardstick, especially for any company mixing multiple revenue streams.

Peacock projects ARPU of $6 to $7 per month across all three tiers of service. That would put it in line with S&P Global estimates of Comcast’s distribution revenues from basic-cable networks such as MSNBC and USA.

But Comcast’s basic-cable and regional sports networks also sell ads. All told, S&P Global estimates those networks each yield around $10 in monthly ARPU. Peacock likely won’t approach that level for a while, even NBCU officials say.

They project Peacock won’t be profitable until 2024, by which time it would have 30 million to 35 million subscribers. That’s the same year Disney+ projects it will break even, though analysts estimate the Mouse House’s streamer will have three times as many subscribers.

But even if Peacock loses money early on, Comcast anticipates the service will help its overall bottom line.

Most importantly, a free and deep streaming service semi-exclusive to the MVPD may give cord-cutters more reason to sheath the scissors and stick around. Just as Comcast’s Xfinity platform already treats Netflix like just another cable channel, Peacock may help Comcast maintain hegemony over Input 1 on users’ TVs.

That will be crucial as Comcast tries to sustain its biggest ecosystem while trying to recapture users who already have migrated to streaming services.

Given the prospect for consumer confusion in this fractured new era, it’s possible Peacock’s familiar recipe will provide the sort of TV comfort food that audiences will feast on