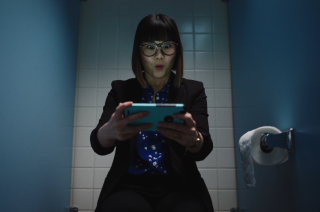 ViacomCBS is launching a new ad campaign for its ad-supported streaming service Pluto TV that emphasizes that Pluto is free.

In commercials that will run in late night TV Monday, viewers are shown tuning into Pluto TV and then vanishing, much like subscribers are disappearing from pay TV.

“Where do you go when you drop in to Pluto TV? To a place far, far away from other TV. Where the TV flows like it’s free. Because it is. And oh, you’re going to love it. Hundreds of channels for zeros of dollars. Drop in. It’s free,” the spot says.

“Drop in. It’s Free,” is the slogan of the campaign, which will also run out of home in New York, Los Angeles, Atlanta, Dallas, Chicago, Minneapolis and Houston, on connected TV and streaming audio, digital, social and in-theater.

The campaign also touts a new logo for Pluto TV and upgrades to the product, including  an improved interface, watch lists, favorite channels and a “watch now” button. Pluto TV calls the product upgrade Project Venetia.

“Today marks another major step for Pluto TV in its mission to entertain the planet. Project Venetia makes it even easier for viewers to find and enjoy their favorite streaming TV programming,” said Tom Ryan, CEO and co-founder of Pluto TV. “And with our new brand campaign, we’re communicating the core value proposition of Pluto TV and inviting everyone to visit a bold new world of television. As our new tagline promises, you can drop in anytime and start watching hundreds of channels on any device, all for free.”