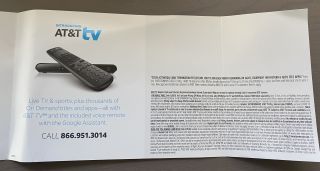 It may be delivered over the open internet. And it may be powered by Google software. But AT&T’s new pay TV service, AT&T TV, is as traditional as it gets when it comes to the fine print.

After receiving an AT&T TV brochure last week at Next TV’s Los Angeles office, we broke out ol’ magnifying glass to examine some of the caveats.

The brochure prominently advertises a first-year promotional price of $79.98 a month for AT&T TV and AT&T Fiber (1 Gbps), with fine print adding taxes and a $10-a-month “equipment fee” for the gateway. AT&T is throwing in a $200 Visa reward card for “qualifying” AT&T TV signups.

Also read: AT&T TV: Everything You Need to Know About the Streaming Version of AT&T’s Premium Pay TV Service

For those unfamiliar with AT&T TV, the service will ultimately replace DirecTV satellite, U-verse IPTV and AT&T Now vMVPD platforms, offering a service based on Android TV and its accoutrements (all the apps available in the Google Play Store, plus voice control via Google Assistant). There’s not satellite dish or truck roll required to establish service, but there is a proprietary set-top.

Our AT&T TV brochure touts “live TV & sports, On Demand, Cloud DVR and access to HBO, Netflix, Pandora and more!” It doesn’t say how many channels specifically are in the bundle.

So what’s in the fine print?

> Terminating the AT&T TV service early in the 24-month commitment will trigger a charge of $15 per month left on the contract.

> There’s a $10 discount for bundling AT&T TV with AT&T fiber internet, and the discount kicks in “within three months” of signing up for service. Until that discount kicks in, subscribers will pay $99.98 for the double-play service, plus tax. That includes not only the $10-a-month that’s not yet been discounted, but the $10-a-month “internet equipment fee.”

> AT&T TV subscribers get one Android TV-powered set-top as part of their advertised monthly service price. Additional set-tops can be purchased for “$120 each for on installment.”

> If you cancel the service within the first 14 days, you must return the AT&T TV set-top in order to avoid a $120 “non-return fee.”

> There are no credits for any “partial-month periods or unwatched content.”

> “Pricing, channels, features and terms [are] subject to change & may be modified or discounted at any time without notice.”