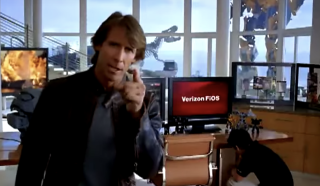 Verizon has a long, tortured history with video.

How else can you describe a twisting, disjointed 15-year journey, in which the company spent billions laying out fiber and launching a highly sought-after IPTV-based pay TV service, Fios TV, only to abandon it when shareholders lost their nerve amid the Great Recession?

What other words can you use for the billions more the No. 1 U.S. wireless company spent buying companies, technology and content for the very first mobile-first video platform, Go90, only to watch consumers reject it outright?

These days, Verizon’s video strategy has been diminished to marketing third-party streaming platforms including Disney Plus and YouTube TV. How’d Verizon get from there to here?

Verizon was borne out of the 2000 merger of Bell Atlantic and GTE, its name a portmanteau of veritas (Latin for "truth") and horizon.

In 2005, Verizon announced the launch of Fios (a contraction for "fiberoptic service"), a bundled internet, TV and phone offering based on a hugely ambitious plan to beat the cable industry with a $23 billion fiberoptic rollout.

Launching in Keller, Texas, and nationally promoted with an expensive TV ad campaign featuring action-movie director Michael Bay, Fios debuted with the tagline, “This is Fios. This is big.”

The Verizon Fios triple-play featured an innovative IPTV-based pay TV service—which would soon be parroted by competitor AT&T and its U-verse platform. Fios TV and its state-of-the-art user interface caught the imagination of key consumer markets, notably New York, where users eagerly anticipated an alternative to the James Dolan-led Cablevision.

“Fios was greatly anticipated when it first launched, to the point where there were protests where people wanted to try and get Fios into their towns. It was noticeably faster and the TV interface was [better than] everyone else,” said Alan Wolk, co-founder and lead analyst for TV[R]EV.

But by 2010, with Verizon spending a reported $200 on advertising for every Fios customer it signed up, and the global economy grinding to a near depression-level pace, Verizon’s investors lost their nerve to festoon the nation with fiber.

To get a sense of when the big Fios boulder Verizon wanted to push up a hill started to roll back onto the telecom, read this compelling May 2009 snapshot published by Ad Age.

Meanwhile, Verizon’s pay TV competitors upped their games and caught up. “Their broadband is still the gold standard, but they seem to be giving up on TV—they are outsourcing to YouTube TV and may not mind getting out of the TV business altogether,” Wolk added.

Fios TV continued to siphon huge chunks of pay TV subscribers from cable operators every quarter, surpassing 5 million users and 5% share of the U.S. pay TV market at the end of 2012.

But the will to keep growing the Fios footprint was gone, culminating in Verizon’s deal to sell a huge chunk of its Fios system to Frontier Communications for $1.8 billion in 2015.

Fios TV (and U-verse) have been in accelerating decline for several years, with the former losing another 222,000 customers in 2019 and finishing the year with a base of only 4.2 million customers.

Named after the mobile viewing behavior of tilting a smart phone from vertical (profile) to horizontal (landscape) modes, Go90 was launched with huge fanfare by Verizon in 2015, billed as a can’t-miss opportunity for the No. 1 U.S. wireless carrier to justify its $4.4 billion purchase of AOL and its copious advanced advertising assets.

Actually, AOL was among a number of purchases that culminated in the creation of a Verizon operating unit called Oath Brands, which was headed by former AOL chief Tim Armstrong, and ran Go90 into the place many Armstrong business went … into the ground.

Earlier, in 2014, there was a $200 million acquisition of Intel’s OnCue video tech assets There was the $4.83 billion purchase of online media company Yahoo, and the purchase for an undisclosed sum of Vessel, the online video company founded by former Hulu CEO Jason Kilar.

Amid anemic audience numbers, Verizon Go90 was discontinued in 2018. Various reports have priced Verizon’s Go90 bath at around $1.2 billion, but who really knows how much higher it goes. Notably, Verizon wrote down its Oath media unit to the tune of $4.6 billion in 2018.

Under Vestberg, Verizon has pulled back from content acquisition and is instead focused on partnerships, such as the agreement with the Walt Disney Company to offer a year of free Disney Plus service to Verizon unlimited wireless customers, as well as Verizon’s Fios fiber internet and 5G fixed wireless subscribers.

The Disney agreement is similar to one struck by Verizon earlier last year with Google, enabling Verizon to bundle virtual MVPD service YouTube TV along with Fios, fixed 5G and other services.

On a January earnings call, Vestberg called these partnerships a “win-win” and the strategy “we want to have going forward.”

The device is powered by Google’s Chromecast OTT software interface, with Android TV elements included too, and it features “nearly unlimited” cloud DVR storage space, according to Verizon. Verizon Stream, which retails for $70 and has been given away to Verizon 5G Home customers, also has access to Google Assistant and its voice-control feature.

In addition to providing a platform for its Disney Plus and YouTube TV integrations, Verizon Stream has access to Google Play, so users can download YouTube or pretty much whatever third-party streaming app they want … save for the biggest OTT app of all, Netflix. Indeed, Verizon Stream launched without support for the No. 1 streaming service in the world, causing the tech press to largely scratch its collective head, given the surfeit of OTT device competition that includes Roku, Amazon Fire TV and Apple TV, just to name a few players.

In January, Verizon announced a new way in which it bundles its wireline Fios services, allowing customers to choose internet, TV and landline phone services a la carte, and ostensibly eliminating hidden fees and contracts in the process.

For video, customers can subscribe to Verizon’s virtual pay TV partner, YouTube TV, and get a month free of the $50-a-month service.

Or they can choose Fios TV--Verizon is now offering a “test drive’ of its full 425+ channel bundle, allowing customers to pay $50 a month for two months, plus $12 a month per set-top. Once that two-month trial is over, Verizon said it will “recommend” what video package its customers should settle into permanently.

One option is the “Your Fios TV” bundle, which includes around 125 channels for $50 a month (plus $12 per month per set-top). Subscribers, however, can choose the five cable networks they absolutely have to have. Local access to major broadcast networks are included in all bundles.

For $70 a month, customers can get the “More Fios TV” bundle, which features around 300 channels, including regional sports networks, and waives the $12 charge for the first set-top.

The Full Monty is the $90-a-month “The Most Fios TV” package, which is includes more than 425 channels, one set-top gratis and a $12 DVR service credit.

“Customers have been loud and clear about their frustrations with cable, and we’ve listened. As a result, we’re transforming our approach to Internet and TV offers by giving customers more choices and more transparency,” says Frank Boulben, senior VP of consumer marketing and products at Verizon, in a statement.