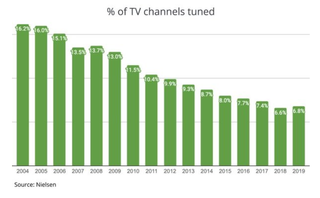 The big bundle keeps getting smaller in the average American home.

According to Research Intelligencer, a division of digital publishing company MediaPost, the average number of TV channels received by U.S. households declined 6.4% last year, from 191.8 in 2018 to 179.5 in 2019.

This is a continuing trend, of course, as more and more households “cord shave” to more economical pay TV programming bundles, switch to skinny-bundle virtual MVPD options like Hulu + Live TV, YouTube TV and fuboTV, or cut the chord all together, and rely on on-demand streaming services like Netflix and Disney Plus

As the Research Intelligencer graphic above shows, the decrease in channels received creates a corresponding increased in the average in the percentage of channels “tuned” into by the average home. In other words, people are still watching basically the same number of channels, they just have access to less of them.

In 2019, the percentage of channels tuned increased for the first time in a decade, according to a Research Intelligencer analysis using Nielsen data, rising from 6.6% in 2018 to 6.8% in 2019.