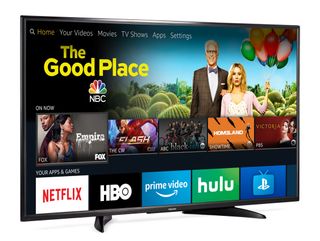 Like a number of industries Amazon dabbles in, there are those who fear that the technology giant, if it were so inclined, could take over the television business, acquiring a critical mass of sports and other essential programming rights, delivering them as loss leaders to support its core global retail operation.

Pay TV, for example, could be given out in the same way that Amazon doles out free shipping.

“We have an open ecosystem,” Gupta said. “You look at a platform like Prime Video, and it’s available on all sorts of platforms and devices.”

Certainly, open or not, Amazon controls a lot of video assets, starting with the Fire TV ecosystem, which Gupta claims is more proliferate than Roku when international markets like Europe are considered.

The world’s second biggest subscription video on demand (SVOD) service next to Netflix, Amazon Prime Video, will finish 2019 with around 96.5 million subscribers, an 8.8% year-over-year uptick. Since Prime members get free shipping on Amazon store goods, the Prime Video service is insulated against new competition from Disney+, Apple TV+ and HBO Max in a way that Netflix isn’t.

There’s also Twitch, a platform for watching live-streams of online multiplayer games that Amazon acquired in 2016 for $970 million. As Amazon continues to negotiate for live sports rights with major leagues like the NFL and NBA, expect Twitch’s acumen for live-streaming to broaden its focus beyond Fortnite in coming years.

Then there’s Fire TV, the platform embedded into millions of smart TVs, HDMI dongles and Alexa-powered smart speakers all over the world.

Fire TV, Gupta said, is “No. 1 in the U.S., the UK, Germany, Japan, and India. Those have been our focus markets to date. We are expanding—this year we launched in France and Spain, and we’ll expand to more regions next year. For us, it’s about building that full home integration. We have a great crossover ecosystem across Fire TV and our Echo devices. We can touch pretty much every point in the home.

“Amazon Prime is on Roku,” he noted. referring to Amazon’s biggest domestic rival in the OTT ecosystem business.

Despite Amazon’s proclamation of open intentions, there’s concern over its market power. The Walt Disney Company, for example, didn’t secure a deal to have an app for its Disney+ service on Fire TV until less than a week before the platform’s Nov. 12 launch. Amazon was reportedly playing hardball in regard to terms to carry the Disney+ app in its ecosystem. According to the Wall Street Journal, Amazon was negotiating for a larger piece of Disney+ subscription revenue than Disney was willing to offer.

“I can’t get into that specifically,” Gupta said. “But speaking more broadly, I can say the process of adding apps to Fire TV is a very iterative process involving a lot of discussions between engineering teams. In the Netflix app, for example, when a customer says to Alexa, “Play Stranger Things,” it needs to work, otherwise people lose trust in the experience. If we’re going to highlight an app like Disney+, it can’t be broken. And to make sure that doesn’t happen, there are many facets to the discussion.”

Controlling a lion’s share of OTT homes—it’s debatable as to whether Fire TV is bigger than Roku in the U.S.—Fire TV is a platform that a subscription service like Disney+ can’t afford not to be on.

“That’s a great opportunity for our partners,” Gupta said. “That’s what really resonates with them—they like the fact that they have access to Amazon Prime users.”

That may just be the tip of the iceberg in terms of Amazon’s market power, which is driven by a data collection engine that is unrivaled, even in the elite corps of FAANG companies.

“Facebook knows what you want to be. Amazon knows who you really are,” said TV[REV] analyst Alan Wolk.