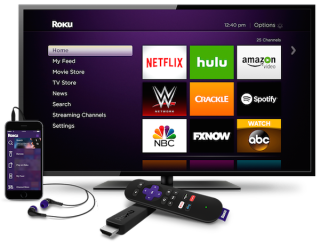 Or, as authors Lucas Shaw and Gerry Smith put, “Nearly every inch of real estate on Roku is for rent.”

For example, an advertiser can take over the Roku homepage, as Hulu recently did when it poached the rights for Seinfeld from Netflix. According to Bloomberg, those rights go for around $1 million. (The news service didn’t specify how long of a takeover that $1 million buys.)

Hulu, Netflix and Showtime, meanwhile, have to pay Roku a licensing fee of $1 a customer to have dedicated buttons on Roku remote controls that take users directly to their service.

Roku is projected to take in more than $600 million in advertising revenue this year and could reach $1.5 billion by 2022, according to RBC Capital Markets figures that are highlighted in the Bloomberg article. =

Perhaps Roku’s most notable monetization feature is its carriage model. While pay TV operators cough up licensing fees to carry media networks, Roku pays nothing to have content companies put apps (aka “channels”) on its platform. But Roku gets a share of the ad dollars, just the same.

And when a subscription service like Netflix signs up a customer on Roku, the platform gets a cut of the revenue, as well.

Despite the explosive growth of so-called “platform” revenue on Roku, which grew another 79% in the third quarter, the company still loses money, Bloomberg noted.

Hardware is a big reason why, with the company still selling its devices at artificially low prices to better proliferate its OTT ecosystem.

But proliferated it is.

Speaking to Bloomberg, Sam Bloom, who heads advertising firm Camelot, said, “When we went out to Roku, my eyes were opened. I was shocked by how large the footprint is there.”