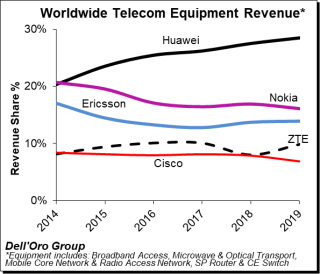 U.S.-led efforts to banish Chinese technology vendor Huawei have been unsuccessful, according to figures released in a new report by research company Dell’Oro Group.

Huawei steep growth arc has been slowed by Western sanctions. But it continued to hold a market share lead in the global telecom equipment supply business in 2019, controlling 28% of the market—flat with 2018. And Huawei’s revenue continued to grow at a time when Western suppliers including Cisco, Nokia and Ericsson each saw slippage.

Notably, ZTE—another Chinese company that, while less so than Huawei, has also been accused by the Trump Administration for helping the Chinese government conduct espionage—saw its market share rebound by 2% in 2018.

“The efforts by the U.S. government to curb Huawei’s rise has so far had mixed results—we estimate Huawei’s overall telecom equipment share continued to improve in 2019, but the pace of the 2019 share growth was weaker than its average 2014-2019 share growth," Dell'Oro Group said in a note sent to media.

Why does this matter to the OTT market? To the extent that many leading video companies are telecoms, the exclusion of a leading global supplier to the U.S. market has business implications, particularly as video becomes a more globally situated enterprise.