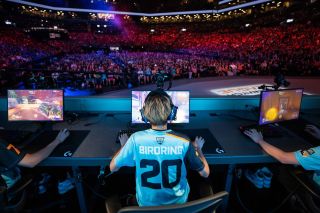 Google’s YouTube Gaming unit escalated the talent war being waged among live-streaming powerhouses, announcing a deal with publishing giant Activision-Blizzard to exclusively stream events from three of the world’s most popular esports titles.

The deal also makes Google “preferred parrtner” for all of Activision-Blizzard’s titles, providing game-hosting infrastructure to hundreds of millions of monthly users.

The deal covers the new Call of Duty League, the three-year-old Overwatch League, Hearthstone Esports, “and more,” according to a release. Activision-Blizzard also owns such major game franchises as World of Warcraft, Starcraft, Diablo, and mobile title Candy Crush.

Ryan Wyatt, YouTube’s global head of gaming and virtual reality, dropped an enthusiastic tweet announcing the deal, welcoming the three leagues to YouTube’s fold. “Let’s get this thing going with the inaugural season of the Call of Duty League kicking off today.”

The announcement came just hours before the first matches in Activision’s new Call of Duty League, which features teams based in 12 U.S. and European cities playing a competitive team version of what most years this century has been the world’s best-selling game.

More importantly, the deal comes amid an expensive talent war between YouTube Gaming, Facebook Gaming, Amazon’s Twitch and Microsoft’s Mixer. All four services mostly feature live-streaming personalities talking about and playing games while interacting in chat rooms with hundreds or even thousands of fans.

Twitch has been the overwhelming market leader with around three-fourths of viewership, but its hegemony is being challenged, first with a series of talent raids the past six months and now the Google-Activision deal.

Mixer set off the talent war last summer when it enticed Ninja, perhaps the most prominent gaming personality, to jump fromTwitch for a reported two-year deal in the low eight figures. A series of other raids followed, coming so often that Twitch eventually began issuing news releases when talent didn’t jump to the competition.

But the new deal promises to further shift the business, said Doron Nir, CEO of StreamElements, which provides a range of tools for streaming talent and companies.

"A lot of the focus in the live-streaming wars has been on the individual content creators being signed, given that they make up the majority of the content in the space,” Nir said. “However, esports events are often responsible for the biggest audiences with the two most watched channels on Twitch in 2019 being Riot Games (the company behind League of Legends) and Overwatch League. This makes YouTube Gaming's (signing) announcement of three notable leagues a significant move in terms of building their content portfolio and showcasing their commitment to the market."

Nir said the move may further amp up the battle for streaming rights to live esports events and tournaments from other publishers.

“The fight for esports rights has been going on for some time and it will continue to grow as the industry has shown no signs of slowing down,” Nir said. “The appeal of esports is no different than that of traditional sports, so whether you are going after the rights for the NFL or Overwatch League, both are hot commodities consumed by millions of passionate viewers.”

Such events have attracted broadcast-sized audiences, but are held infrequently enough that they comprise a smaller share of the overall live-streaming audience on Twitch and its competitors.

Individual tournaments for titles such as Counter Strike: Global Offensive or Dota 2 represent probably the next big signing opportunities, likely to attract heavy bidding for their streaming rights.

The deal is also a win for Google’s cloud-computing unit, itself locked in rugged competition with Microsoft and Amazon’s AWS unit for primacy in that fast-growing tech sector.

Indeed, the company’s own press release focused substantially on news that Google Cloud will be the “preferred partner” meeting Activision Blizzard’s prodigious requirements for game-hosting infrastructure.

Activision-Blizzard said it has “hundreds of millions of monthly active users” of all its games. YouTube said it already has 200 million daily visitors watching its existing game-related content.

“The company turned to Google Cloud because of its highly reliable global footprint, advanced data analytics and artificial intelligence capabilities, and commitment to open source, creating a platform for building future gaming innovations,” the  company said in a release.

Nir said the big cloud providers have been poaching from competitors frequently in recent months, a reflection of both the market’s size and its huge growth opportunities.

“Since live-streaming is the next frontier for digital content creation, we expect to see all types of channels – such as those that focus on talk shows, role playing matches, and music – growing in influence and attracting bigger sponsors,” Nir said.

The deal does not involve China, a major esports hotbed. China is also home base for Ten Cent, whose many game- and internet-related holdings include a 5% stake in Activision.