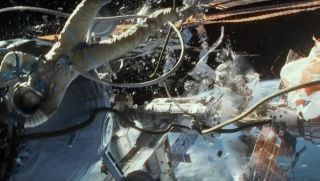 AT&T’s DirecTV pay TV unit has successfully petitioned the FCC to let it move one of its satellites that is in danger of exploding due to a battery problem.

Earlier this week, DirecTV notified the agency that Spaceway-1, a 15-year-old satellite that delivers 720P programming and has been relegated to back-up status, suffered in December “irreversible thermal damage” to its batteries.

If the satellite uses its damaged batteries while in its current geostationary orbit, it could cause an “accidental explosion,” DirecTV said. (Think back to the cascading effect that caused the disaster in Alfonso Cuarón’s 2013 action thriller Gravity.)

As of now, Spaceway-1 can remain operational using solar panels. But that won’t be the case in the upcoming “eclipse season,” which starts later next month.

“Boeing, the spacecraft manufacturer, concluded based on all available data that the batteries’ cells cannot be guaranteed to withstand the pressures needed to support safe operation of the spacecraft in eclipse operations; rather, there is a significant risk that these battery cells could burst,” the FCC filing said.

“Use of the batteries during eclipse is unavoidable and there is no ability to isolate damaged battery cells,” the filing added. “The risk of a catastrophic battery failure makes it urgent that Spaceway-1 be fully de-orbited and decommissioned prior to the February 25th start of eclipse season.”

AT&T, DirecTV’s parent company, is currently working with communications satellite service provider Intelsat to move Spaceway-1 into the so-called “graveyard” orbit—a much higher trajectory that puts it out of harm’s way.

AT&T and DirecTV needed to seek a waiver from the FCC, because they can’t comply with a key requirement—to move to the graveyard orbit, satellite’s must expel all their remaining propellant. Due to its urgent situation, Spaceway-1 will only have time to safely jettison a “nominal portion” of its fuel, DirecTV’s filing said.

For its part, AT&T put out a statement assuring its customers that not only will they be safe from falling satellite debris, they won’t miss their favorite shows, either.

“This satellite is a backup and we do not anticipate any impacts on consumer service as we retire it,” AT&T said in a statement. “We are replacing it with another satellite in our fleet.”