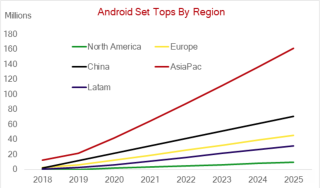 The pay TV set-top isn’t necessarily going away. But it is entering a new global era in which countless video operating systems will be whittled down to a precious few. And Google’s Android TV platform will emerge the clear world leader.

That’s the conclusion of Rethink Technology Research’s latest report, How to Survive the Set-top Box Endgame.

"Android TV, RDK and a handful of other specialist smart TV OSs will come to the fore, mostly at the expense of generic Linux variants, plus a new entry out of China as the U.S. China trade war eliminates what would have been dominance there on Android in favor of Huawei’s Harmony, which will eventually make the transition from Smart TV OS, to full bloodied set tops,” the report reads.

Android TV will have its biggest growth in the Asia-Pacific region over the next five years, surging past 160 million deployed devices, Rethink Technology predicts. In the U.S., it’s growth will be curtailed by Reference Design Kit (RDK), a conglomerate that includes Comcast, Liberty Global and other cable companies, and which specifies an open software stack for pay TV set-tops and other customer premises equipment.

Rethink Technology credits RDK with several key recent moves. Among them was integrating getting close to Metrological, which operates an app destination that provides a similar function to Google’s Play Store. Comcast even purchased the Dutch tech company last year.

“Meanwhile, Huawei’s HarmonyOS will become a major force in China, not due to its merits, but due to China needing independence from US toolsets,” Rethink said in its report." It will take 28% of set top OSs there, against 14% still going to Android TV, and in the rest of Asia Android’s progress will only be held in check by proprietary OSs of big two, Samsung and LG, at least on smart TVs. HarmonyOS will also take 75% of China’s smart TV OS market by 2025.”

In less than three year’s time, Google has made massive inroads in the global pay TV business for the operator tier version of Android TV. The OS provides a simple means to let users tap into Netflix, YouTube or pretty much any OTT app they want via Google Play. It also provides a next-generation voice-control experience with access to Google Assistant. This lets operators provide a modern video experience without incurring any tech development costs.

Google enjoys far less penetration in the global OTT device business with Android TV. But it does have some juice in regard to its Chromecast streaming dongle, which controls 11% of the U.S. OTT device market. Google is reportedly working on a new version of Chromecast based on Android TV.