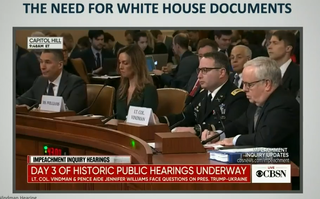 Democratic impeachment managers used clips from various video streams in arguments for how the rules for the Senate impeachment trial of President Donald Trump should be drawn up, including that there should be access to White House documents.

The trial began "in earnest" Tuesday (Jan. 21), itself streamed across multiple platforms.

Impeachment manager Zoe Lofgren (D-Calif.) played testimony from news streaming site CBSN and USA Today online impeachment coverage to argue that the White House has significant documents that the Senate should get access to.

Republicans want the trial to be confined to documents that the House was able to use in its impeachment inquiry and witnesses that appeared in the House hearings. Democrats say the trial must include new documents and witnesses, particularly since the reason some of that material and testimony was not in the House inquiry was that the White House blocked it.

As it did for the House impeachment inquiry, Fox-owned WTTG TV Washington chose to use online streaming for its live news coverage of the Senate trial, while running regular syndicated and network fare on the broadcast signal.