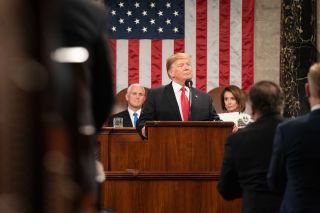 The broadcast networks have set their plans for over-the-top coverage of the upcoming State of the Union (SOTU) address Tuesday (Feb. 4).

ABC News has not announced its coverage. But according to someone familiar with its streaming plans, the coverage on ABC News Live, the network’s 24/7 streaming news channel, will be anchored by World News Tonight Weekend anchor and Chief National Affairs Correspondent Tom Llamas. That livestream will begin at 8 p.m., with a recap and analysis Wednesday on social media newscast On Affairs exclusively for Facebook Watch. In addition, FiveThirtyEight will have a preview of the speech. ABCNews.com will also livestream the speech.

CBSN, CBS News' live, 24/7 streaming service, will wrap its coverage around a 9-11 p.m. stream of the network's broadcast feed of the speech itself, anchored by CBS Evening News' Norah O'Donnell. CBSN's live pre- and post-speech coverage will be anchored by Tanya Rivero beginning at 5 p.m., with Elaine Quijano leading coverage from 6-9 p.m. Quijano will also anchor the post-address coverage.

CBSN is available at cbsnews.com/live or on the CBS News app for mobile devices.

NBC's streaming service, NBC News Now will begin its coverage at 8 p.m., then stream the broadcast coverage at 9-11 p.m., anchored by Lester Holt and Savannah Guthrie.

NBCNews.com will also live stream the speech, plus make an audio streaming version available to TuneIn.

Foxnews.com will have a dedicated landing page devoted to reporting on the speech and feature a live blog updated throughout the speech, which will be livestreamed, followed by reaction from lawmakers and others.