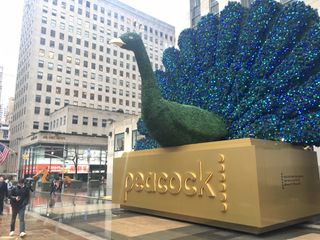 Comcast and NBCUniversal today unveiled the key details behind Peacock, the company’s upcoming response to the streaming age.

The new platform will be mostly ad supported, with a “Peacock Free” version available to all. Ad loads, the NBCU said, will be kept at no more than five minutes per hour.

“Peacock Premium” will be the version with substantially more content—twice as much, according to NBCU. It will be available for free to subscribers of Comcast, as well as Cox Communications under a distribution deal. Those who don’t have a subscription to those cable companies will pay $5 a month for the service. They can pay $10 a month for a version that has no commercials.

Comcast’s X1 and Xfinity Flex subscribers, as well as Cox Contour users, will have access to Peacock Premium starting on launch day, April 15, but the rest of the world will have to wait until July to subscribe to it. NBCU said Sky pay TV subscribers will also have access to the service at some point.

NBCU said it’s expecting to have 30 million to 35 million Peacock users by 2024, with hoped-for revenue in the $2.5 billion range.

“Peacock will provide consumers with a destination that goes beyond movies and television, aggregating a variety of content that fans want on one service,” said Matt Strauss, chairman of Peacock and NBCUniversal Digital Enterprises, speaking during NBCU’s investor day event Thursday. “By delivering timely and topical content like breaking news, live sports, and watercooler moments from late night, Peacock is uniquely bringing a pulse to the world of streaming that does not exist in today’s marketplace.”

The free iteration will contain around 7,500 hours of programming, including a selection of classic TV series and movies, next-day streaming of some broadcast shows, Spanish-language shows, as well as a curated collection of news and sports.

Strauss said that more than 600 engineers have been assigned or hired to the Peacock launch.

Thursday's presentation at the famed "30 Rock" in Manhattan featured all or most of Comcast/NBCU's upper management, including NBCU chief Jeff Shell and the grand puba of the whole corporation, Brian Roberts.