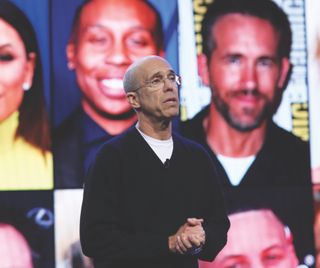 While executives and companies vested in traditional media have a spotty record in terms of creating video programming for mobile phones, Jeffrey Katzenberg thinks he has simple entertainment physics working in his favor with Quibi, the new streaming platform featuring short-form video targeted to mobile devices, launching April 6.

“One thing that’s happened to me in 45 years of being in Hollywood and in this industry is, I’ve never seen an instance where real quality entertainment hasn’t found an audience,” Katzenberg told Next TV. “Whether we find it on the first day or tenth day or 200th day, if you make it and it’s good, they will come.”

For the former DreamWorks co-founder and his celebrity CEO, Meg Whitman, the former Hewlett-Packard and eBay chief executive, getting financial and creative support for Quibi hasn’t been much of a problem. Quibi (which Katzenberg says is short for “quick bites”) just announced another $750 million in private funding, bringing its total VC haul to $1.75 billion since introducing itself two years ago. All of the major media companies are backing Quibi, as is Chinese conglomerate Alibaba.

Advertisers ranging from T-Mobile to PepsiCo to Google have also bought in. Whitman told a jam-packed Las Vegas auditorium crowd during Quibi’s CES presentation in January that the company had already sold out an initial advertising inventory valued at $153 million.

Then there’s the creative talent, which reads like a roster from an early ‘90s NBA Dream Team. Except there’s a lot more than 12 on the team. Steven Spielberg, Ben Stiller, Keifer Sutherland, Idris Elba, Kevin Hart, Chrissy Teigen, Lorne Michaels, Sam Raimi and Antoine Fuqua. There are just too many Hollywood A-listers, either producing content for Quibi, or in front of its cameras, to name.

“At the end of the day, I think the success of anything comes with the content. Content is king, as they always say,” said Jeff Gilbert, VP of strategy for Qwilt, operator of a popular cloud-based content delivery network (CDN). “And if Quibi is able to bring compelling content, even in short-form, anything is possible.”

Indeed, all that’s missing at this point is a mass audience.

But Go90’s sinking to the bottom of the OTT ocean was infamous … and worth discussing in any narrative weighing Quibi’s chances.

Named after the mobile viewing behavior of tilting a smart phone from vertical (profile) to horizontal (landscape) modes, Go90 was launched with huge fanfare by Verizon in 2015, billed as a can’t-miss opportunity for the No. 1 U.S. wireless carrier to justify its $4.4 billion purchase of AOL and its copious advanced advertising assets.

Actually, AOL was among a number of purchases that culminated into an operating unit called Oath Brands, which was headed by former AOL chief Tim Armstrong and ran Go90 … into the ground. Earlier, in 2014, there was a $200 million acquisition of Intel’s OnCue video tech assets There was the $4.83 billion purchase of online media company Yahoo, and the purchase for an undisclosed sum of Vessel, the online video company founded by former Hulu CEO Jason Kilar. Various reports have priced Verizon’s Go90 bath at around $1.2 billion, but who really knows how much higher it goes.

In the Go90 post-mortem, a popular narrative emerged that maybe there isn’t a business in short form viewing for smart phones.

For his part, Katzenberg was enmeshed in Go90, too. In 2013, three years before Comcast bought DreamWorks Animation for $3.8 billion, and Katzenberg still ran the studio, DWA paid $33 million for AwesomenessTV, a popular YouTube channel operator ran by media entrepreneur Brian Robbins.

Right before Comcast took over, Katzenberg and Robbins carved out a $159 million deal to make AwesomenessTV Go90’s biggest programming supplier.

Katzenberg is loath to transgress the grave of Go90 in any way. However, he did say, “I think we gained many of the insights that informed what we’re doing today. And the structure of the [Go90 business model] is fundamentally so different from what we’re doing.”

Nevermind that YouTube, Snapchat and Instagram provide copious examples of successful mobile video business models. Indeed, YouTube made more than $15 billion in advertising revenue last year, much of it generated in mobile. Katzenberg noted that Go90 was a free-to-consumer offering existing only on as much advertising as Verizon could sell.

While Go90 “could only spend $5,000 a minute on programming at the highest end of what they were doing, Quibi spends $100,000,” Katzenberg said, supporting his “apples vs. submarines” analogy.

Return to the Syndication Model

Katzenberg cited at CES Dan Brown’s best-selling Da Vinci Code novel series, and its short chapters, as an inspiration for Quibi. “I’m guided by the interest I have in this new form of storytelling,” he said, explaining a new paradigm where not just a targeted audience of viewers millennial-aged and younger watch movies and TV series broken down into seven-to-10-minute snippets, but older viewers get into the habit, as well.

In terms of imagining Quibi’s relationship with its makers, “We went back to the way television used to work in the ‘60s, ‘70s and ‘80s,” Katzenberg said, when producers were able to keep their syndication rights.

Indeed, Quibi creators get back rights to the full-length version of their show in two years, and the episodic version in seven years.

“Networks paid the cost of production, but they licensed content from IP companies, studios and creatives. The post-network value—the syndication value—was the payoff. That is where the great win came,” he explained.

A-list talent is flocking to Quibi, Katzenberg added, “not because we’re the nicest people—although I hope we’re nice. It’s because we’ve given them a financial incentive that’s better than anything else that exists in our industry today.”

Quibi just announced an aggressive promotional campaign that will give users three free months to try the service. It’s the price you have to pay in a world in which the new Apple TV+ streaming service is offering 12 free months to purchasers of new Mac computers and iPhones.

Not that Katzenberg sees Quibi competing with Apple TV+ … or Disney+, or HBO Max or Peacock, or even Netflix or any of the other new SVOD services being foisted into the so-called “streaming wars.”

Katzenberg views Quibi as driving in entirely “other lane” compared to more living-room-based OTT services. “How many people are going to give up their Apple Music or their Spotify subscription because they’re now subscribing to Disney+?” he asked.

Beyond a different qualitative level of storytelling, Quibi is selling itself on a core interactive technology feature it calls “Turnstyle,” which is based on the natural habit of toggling between vertical profile video to horizontal landscape mode, and back (the very behavior Verizon branded its failed mobile video enterprise on).

Turnstyle is woven into the very fabric of the Quibi viewing experience. During Quibi’s CES presentation, Chief Product Officer Tim Conrad demonstrated the feature by showing off a clip from the short-form series Nest, in which a terrified woman tries texting and calling her husband as an intruder shows up on her Nest WiFi doorbell. The viewer is inclined to watch in profile mode the portion of the video that unfolds on the woman’s smartphone, as she desperately tries to message her husband. The viewer then toggles back to landscape to view more traditional narrative scenes unfold, such as the intruder kicking down the door.

The approach requires Quibi producers to create two production workflows. And editors on Quibi projects say that can double post-production costs. Meanwhile, Quibi just began locking legal horns in a California federal court with a New York-based video technology company, Eko, which says it owns the patent to the tech behind Turnstyle. Quibi said that claim is bogus and is counter-suing.

Still, Turnstyle is one of the reasons, Katzenberg said, that Quibi creators are so “charged up and engaged about doing something different.”

So how many users does Katzenberg expect the first month? Or for Quibi’s first year? He said he had benchmarks in his head for what might define success, but he isn’t sharing those publicly.

Let’s just say these performance benchmarks lay somewhere between what Go90 did and the 26.8 million users Disney+ signed up in its first month-and-a-half on the market.

A promotional blitz for Quibi, which began with a pricey Super Bowl ad, will summit over the next few weeks. “You’ll have to be hidden away, under a rock, or in a cave on an island that no one has ever heard of not to know about us,” Katzenberg said.

“Today, 26 days out [from launch], I have lot of optimism,” he added. The audience will come. He’s sure of it. “People have made really great programming for us. When [viewers] see it, we’ll be on our way.”