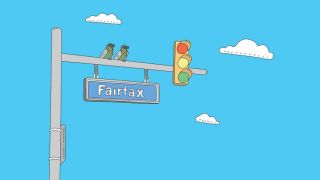 Amazon Studios has picked up two seasons of adult animated comedy Fairfax. Each season will have eight episodes and the show will premiere on Amazon Prime in 2021.

“Fairfax is smart, weird and hilarious, and we’re excited to work with Matt, Aaron, Teddy and the teams at Serious Business and Titmouse so our Prime Video customers around the world can see this unique new series,” said Albert Cheng, COO and co-head of television, Amazon Studios.

Fairfax is from Amazon Studios in association with Serious Business and Titmouse, with executive producers Hausfater, Buchsbaum and Riley; Peter A. Knight; Jon Zimelis and Jason U. Nadler for Serious Business; and Chris Prynoski, Shannon Prynoski and Ben Kalina for Titmouse.

“This show is a love letter to kids today – the generation that will most definitely save the world from global warming, if they don’t die from eating Tide Pods first,” the creators said. “It’s a modern look at the timeless struggle to be cooler than you are, to fit in while standing out, and what it feels like to wait in line for a pair of sneakers you’re never going to cop. We’re incredibly excited to be working with Serious Business, Somehoodlum, Pizzaslime, Titmouse, and Amazon Studios. We couldn't have asked for a better team.”